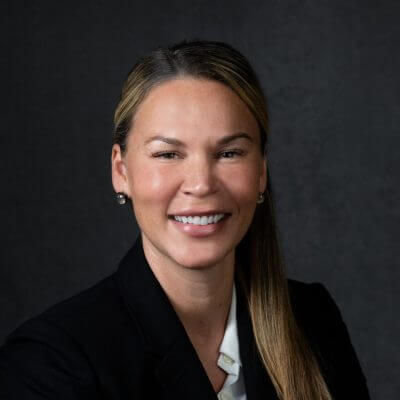 Taryn is the Executive Search Consultant for Talent War Group. Prior to joining TWG, Taryn served six years in the US Navy as an Aviation Rescue Swimmer, only the 33rd female to ever join this elite group. She attended Fleet Replacement Squadron, HSC-3 in Coronado, CA then being assigned to Helicopter Sea Combat Squadron 21. In 2014, she deployed on the USS Peleliu (LHA-5) participating in RIMPAC where she received her MH-60S Crew Chief qualification.

Taryn volunteered for deployment on the USNS Mercy (T-AH-19) for Pacific Partnership 2015, flying over 200 hours as Crew Chief and executing rescues, and ultimately being a key part of her crew being awarded “Aircrew of the Year.” Taryn was Training LPO at home guard overseeing teaching, aircrew curriculum as well as creating syllabi including classroom lectures on inflight procedures, CRM and Search And Rescue procedures.

Qualifying crewman as Crew Chief, Taryn was known for her unique ability in the selection and identification, and assessment of candidates. Ultimately, Taryn personally coached, mentored and trained 100s to excel in the most extreme and difficult environments. Taryn’s passion, drive and commitment to identifying and developing talent is an invaluable asset to the mission of Talent War Group.