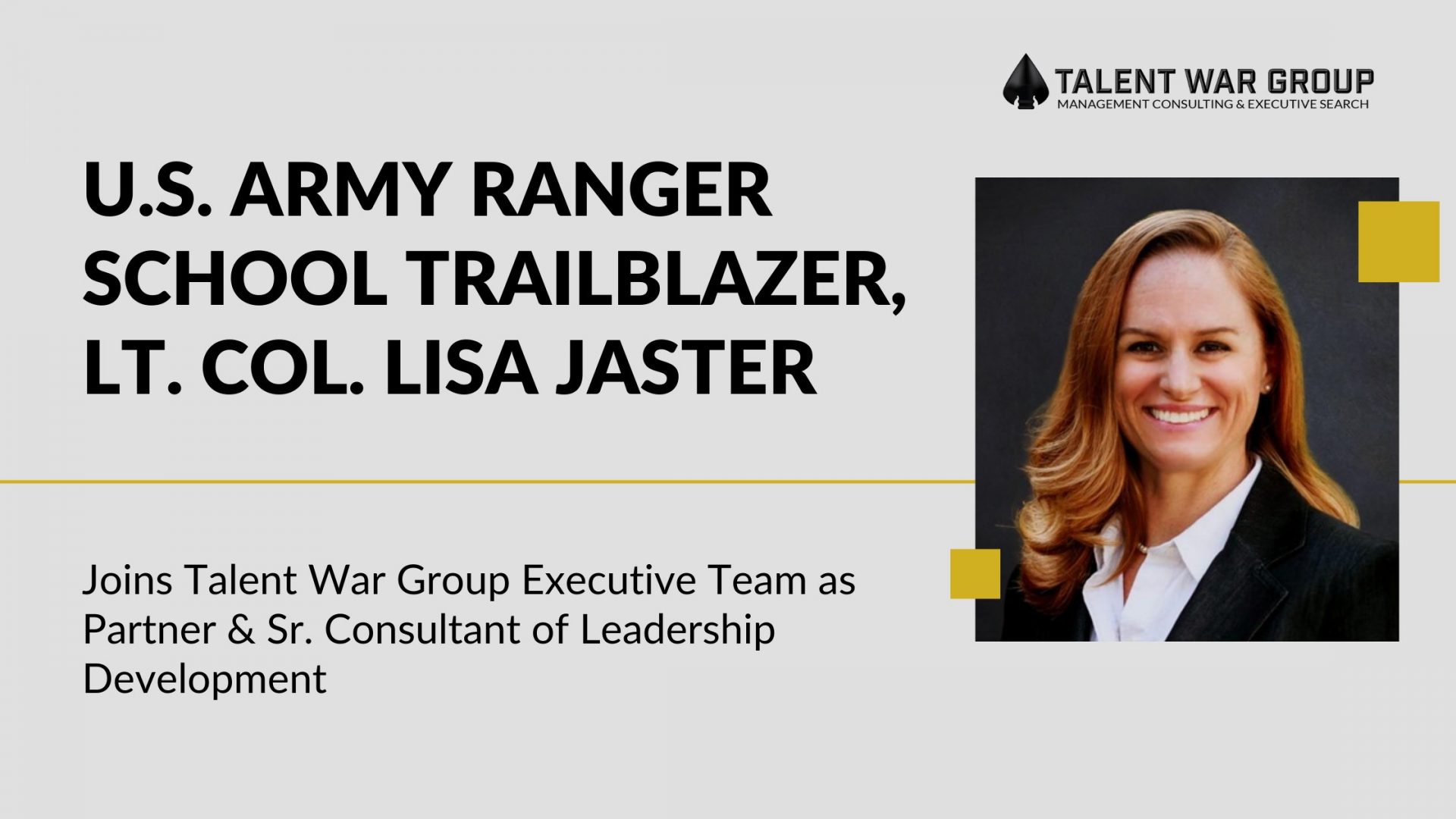 AUSTIN, TX, August 1 – Talent War Group (TWG) announces that Lisa Jaster, West Point Graduate, and the third woman in the history of the U.S. Army to graduate from Ranger school, is joining the leadership team as Partner and Sr. Consultant of Leadership Development.

An active United States Army Reserve Lieutenant Colonel and engineer officer, Lisa Jaster was the first female reserve soldier to graduate from the Army’s Ranger School. Graduating from the U.S. Military Academy in 2000 with her Bachelor of Science in Civil Engineering, she served as an Army engineer officer on active duty for seven years. Following her service she joined Shell Oil Company as an engineer, returning to US Army Reserve status in 2012.

“Lisa’s journey is unique, which makes her pragmatic and highly effective leadership style valuable to the business community. She is a trailblazer who leads by example and the exact caliber of executive Talent War Group seeks to round out our management team,” said Mike Sarraille, Founder & CEO of Talent War Group. “We are proud to have her join us and are looking forward to the growth she accomplishes here at TWG.”

“Talent War Group continues to impress me with its growth and impact in the corporate world. As a US Army Reserve Lieutenant Colonel, I am looking forward to driving the company’s vision of bringing leadership lessons from the battlefield to the boardroom,” says Jaster.

Throughout her career, Jaster has navigated through male-dominated industries, making room for herself while paving the way for other women to be successful. She attributes her success and accomplishments to a life philosophy – ‘Delete the Adjective’ – a belief that an individual’s capabilities to accomplish something should not be defined by their adjectives.

With the recent acquisition of Impact USA, Talent War Group continues to expand its leadership and talent development service offerings to include online learning courses, an initiative Jaster will play a key role in.

Jaster joins the TWG team as a leadership development consultant, executive coach, and keynote speaker, sharing her ‘Delete the Adjective’ philosophy and message, as well as lessons learned from her journey in the military to graduating from Army Ranger School.

Jaster’s new book, “Delete the Adjective” will be released in early 2023 and provide readers with a thoughtful and revealing dive into being a female in Army Ranger School and the obstacles and success she has enjoyed along her unique journey.